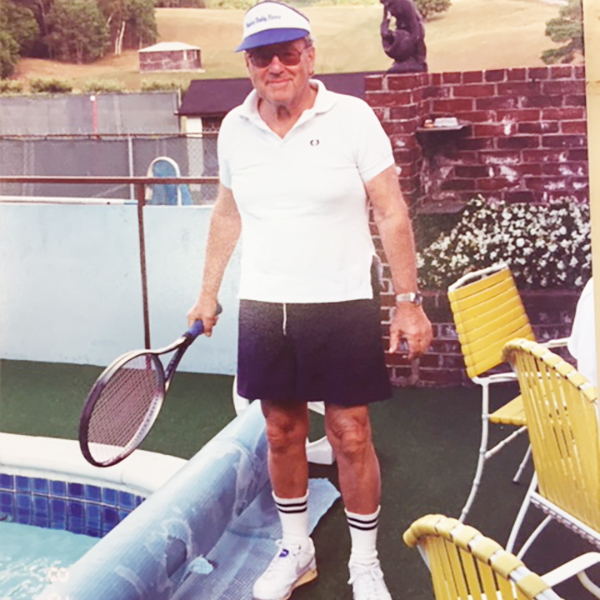 Born in January 1920, Harold Soupcoff was a man of many accomplishments: businessman, accountant, avid tennis player, veteran of WWII, and a founder of Mayfair Clubs. He grew up in downtown Toronto, in the Harbord Street and Spadina area, and played tennis on the outdoor city courts available to him. All his life, he loved the sport of tennis.

During WWII, as a member of the Canadian Air Force, he was sent to Great Britain to serve both his country and their allies. When that service was complete, he returned to Toronto to become a Chartered Accountant. He rose to become senior partner in the firm he had joined as a student. By the 60’s, he left his Accounting firm to work with other talented partners and Toronto businesses.

Mr. Soupcoff loved playing tennis in the summer and went to tournaments in Toronto, Montreal and Florida. In 1970 there were no indoor facilities for winter tennis, and so he and a group of like-minded business friends – all of whom were also ardent tennis fans – built the first Mayfair Clubs facility.

In 1995, Mr. Soupcoff and his business partner, Joe Zentil, took over the four facilities that Mayfair Clubs had grown into, and transformed them, adding fitness facilities and pools. Mr. Soupcoff loved to see people active and socializing, enjoying these facilities. To see the courts filled and the fitness rooms busy gave him a great sense of pride.

Outside of business and tennis, his passions were many. He was devoted to his family and wife Mynne, who was also an excellent tennis player. He loved politics, history, travel, bridge, poker and golf. Together, he and Mynne were devoted to contributing to various Toronto charities.

On January 15, 2006, after an event-filled life, Harold Soupcoff died at the age of 86. We are grateful to Mr. Soupcoff, for his contributions, not only to Mayfair Clubs but to the sport of tennis and squash as well. 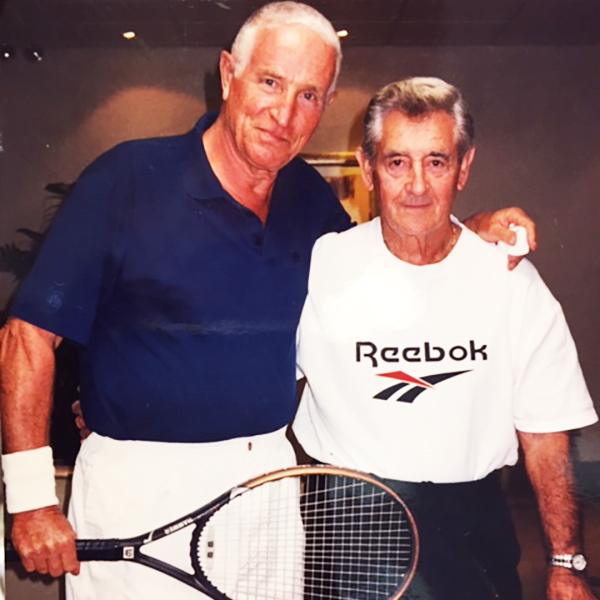 Joe was born on March 12, 1929 in Azzano Decimo, Italy. Joe, his parents and his brother sailed from Genoa to New York City on February 11, 1948. They eventually made their way to Canada via Fort Erie on February 13, 1948. Joe was 18 years of age when he arrived in Canada. Since his arrival, Joe's keen work ethic and determination were a perfect match for the burgeoning City of Toronto in the early 1950s. Within a couple of months, Joe became a plumbing apprentice, before eventually receiving his Master Plumber license in 1954. During this period, he also undertook night classes in accounting, physics and drafting at Harbord Collegiate to round out his education.

His plumbing company was a one-man show to start but, would grow to 35 employees in 1956 and 250 by 1966. In the 1970s and 1980s, Joe Zentil Plumbing & Heating was considered one of the largest mechanical contracting companies in Canada, with over 400 employees. He operated his company until 2010.

Joe showed an early passion for sport as he frequently attended the West End YMCA on College Street throughout the early 1950s. His main activities were boxing and, as he liked to say, "calisthenics."

In the early 1960s, Joe was introduced to tennis and became an active member at York Racquets Tennis Club. It was during this time period that Joe fell in love with the game, often playing a minimum of 5 to 6 times per week for the remainder of his life Joe was a natural-born entrepreneur, which led to his involvement in many successful business ventures, primarily in land development and construction. In one of those investments he was able to match his entrepreneurship in the form of Mayfair Tennis Clubs, which was formed with a group of like-minded investors.

Joe was a fixture at Mayfair West, where he played tennis Monday through Friday on Court 12 at 10:30am for over 30 years. He enjoyed tennis because of the physical fitness aspect and the social feature of meeting his large group of friends at Mayfair on a regular basis.

Joe was committed to the success of Mayfair working alongside co-founder, Harold Soupcoff, and, son, Garry Zentil. He is acknowledged for playing a pivotal role in the success of Mayfair and for overseeing its transition from a predominately tennis facility to a full-service family health club. On April 23, 2018, Joe Zentil died at the age of 89. We are grateful to Mr. Zentil for his contributions to Mayfair Clubs. 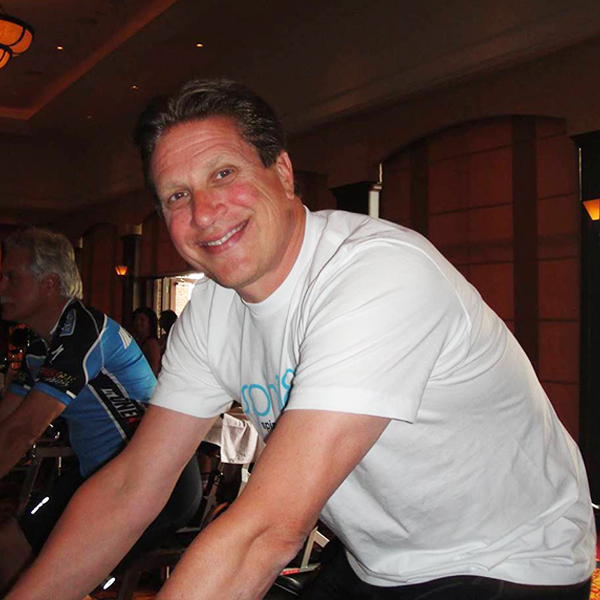 Garry joined the Mayfair Clubs executive team in 1994, and along with Harold Soupcoff and his father Joe, they began the rebirth of Mayfair Clubs into a full-service tennis, squash and fitness club. Garry was instrumental in the success and vision for Mayfair Clubs to become one of Toronto's premier clubs.

Born on April 22nd, 1956 in North York, Garry Zentil was a remarkable contributor to the cultural and economic vibrancy of the GTA. Garry was a natural athlete who excelled at basketball and volleyball in high school at Chaminade College School and graduated as an honour student. He attended York University, where he graduated in 1979 with a B.A. in Economics. Garry dedicated a considerable amount of his time to the community and several hospital charities, most notably Toronto Western Hospital.

Garry started his career as the General Manager of Luxury Hardware before transitioning into construction and land development by joining the family business in the mid-1980's alongside his father Joe and brother Paul. Garry was involved in many successful projects, which eventually led him to the creation of Eagle's Nest Golf Club with other founding investors. Garry was the first President & CEO of Eagle's Nest, one of the premier public golf courses in Canada.

Garry was an active member at Mayfair West, playing tennis and squash on a regular basis. He eventually became passionate about spinning and began a weekly spinning group that became a tight-knit community at the club. This group of like-minded friends combined their love of spinning and desire to contribute to the community by organizing several charitable events for local organizations.

On February 16, 2012, Garry died unexpectedly, at the age of 55, leaving behind his wife and three children. "For those that knew Garry Zentil, they will remember a gentle man who always smiled, never had a bad word about anyone, treated everyone with equal respect and enjoyed his friends. When it came to having heart, Garry was a giant." We are grateful to Garry for his contributions to Mayfair Clubs and for the communities he fostered among our members. His spinning group continued to organize the Garry Zentil Charity Spin-a-Thon at Mayfair West in his honour and over the years, the event raised a total of $90,350 for various Toronto charities.

Message from the President 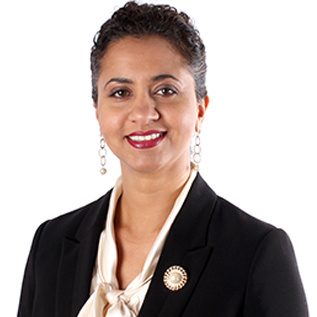 "It is an honour for me to carry on the legacy of Mayfair Clubs. I am so proud of how far Mayfair has come and that our clubs continue to be welcoming spaces for many individuals and families to enjoy active living and sport! I can’t wait to see what the future has in store for Mayfair. Thank you to everyone who helped us reach this incredible milestone."

Read Our 50 Year Article in the Post City Magazine

Like-minded business partners and avid tennis fans open the doors to the first Mayfair Club in the city of Toronto. The new club, Mayfair North, was located at Yonge and Doncaster, and included 4 indoor tennis courts. There was a membership waiting list to join on opening day.

The business model worked so well that a second club Mayfair West was built two years later. This new club included both tennis courts and squash courts and was located on Chesswood Avenue in North York.

With the success of the North and West Clubs, Mayfair decided to open a third club in Thornhill, located at Steeles and Leslie. This club included 16 outdoor courts, a pool, club house, and snack bar and was named the Mayfair Valley Club. It was Mayfair Clubs only outdoor club.

To keep up with increasing market demand for indoor tennis courts, a strategic decision was made to close the Mayfair Valley Club to open another facility with indoor courts. Located at Steelcase and Woodbine in Markham, the new club, Mayfair Parkway included indoor tennis courts, as well as squash and racquetball facilities. Mayfair Clubs also begins to open its facilities as host to various tennis and squash tournaments.

Throughout the 80s, Mayfair Clubs becomes a community hub for individuals and families seeking healthy lifestyles. Together with members, Mayfair hosted various tennis and squash tournaments at the local, provincial and national level as well as multiple events for various charitable organizations and causes.

Mayfair Clubs has supported growing Canadian talent and is recognized as an official Tennis Development Centre in demonstrating a commitment in helping junior tennis flourish in Canada.

Throughout the 90s, Mayfair Clubs undergoes a series of renovations to modernize its facilities to become a full-service club offering fitness and other health-based services. Several tennis courts are converted into saltwater pools.

Full-service restaurants, spa and massage therapy services are introduced at all clubs. Wellness services like physiotherapy, chiropractic care, naturopathy, nutrition and sports medicine are also introduced. Kidspace, a service to provide care for children, is also introduced at Mayfair Lakeshore, with the West and Parkway following soon after.

In 2009, Mayfair Clubs is awarded the Outstanding Loyalty Award to The Canadian Open (Now named The Rogers Cup) and significant contribution to tennis development over the past 25 years from Tennis Canada. In 2010, Mayfair Clubs is presented with a 'Special Recognition Award' from Tennis Canada to honour Mayfair's efforts and dedication to the sport of tennis in Canada.

The MTPL is the only Professional Tennis prize money league in all of Canada. It includes 52 of GTA’s top tennis professionals, former NCAA & CIS players, and the occasional ATP player. All matches are hosted at the Mayfair Lakeshore facility.

Mayfair Clubs continues to make upgrades to their facilities to keep up with market demand.