Our Mayfair Members for the month of October is Justin Kupinsky from Mayfair West!

Justin is an active member at Mayfair West. At 13 years old, he participated in the 2019 Rogers Cup as a ball boy and was nominated as the Ball Boy Rookie of the Year. 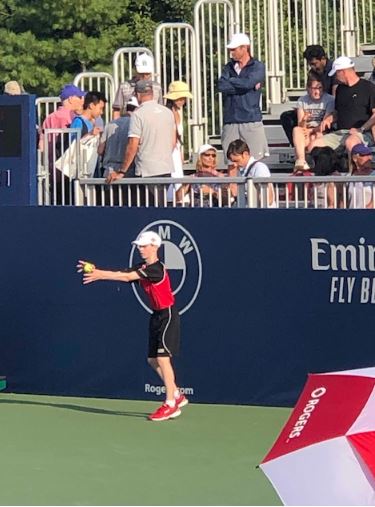 Q & A with Justin

We were able to sit down with Justin for a quick chat. Check out his responses below:

What has been your most rewarding accomplishment?
My most proud accomplishment is being a ball boy at the Rogers Cup this past August. I was very proud (and excited!) to have the opportunity to be part of one of Canada’s most exciting sporting events. It was the best week of my life!

What is your favourite thing about Mayfair?

Justin: My favourite thing about Mayfair – well there are several things I love! First, I love being part of the high performance tennis program. Through this program, I recently had an opportunity to play a U14 singles and doubles team event with other kids I train with, and compete against other clubs which was a lot of fun! Second, I enjoy working out in the gym. Third, I have met very nice people who I have becomes friends with. And lastly, I love eating at the bistro!

Who Is Your Hero? And/or What Do You Want To Be When you Grow Up?

Justin: My hero is Roger Federer as he is such an outstanding tennis player. He also demonstrates great sportsmanship and is involved in lots of different charitable work.

When I grow up I want to be an engineer or designer as I like the creative and problem-solving aspects of both fields.